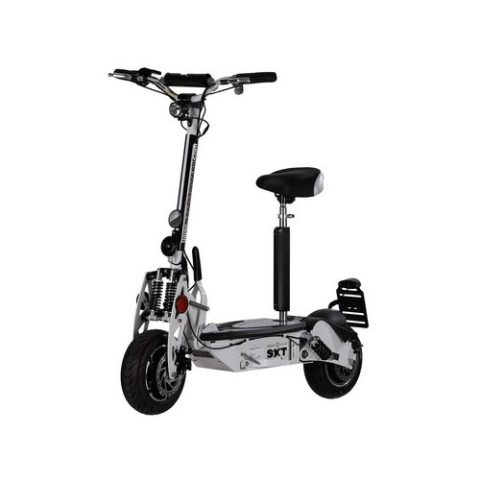 The SXT1000 XL EEC facelift is the result of continuous development of this model series. The successor models probably most significant change is the installed high-torque brushless hub motor with 1350 W max. power. The advantages of the brushless hub motor are obvious – virtually no maintenance required – no chain that needs to be lubricated, no chain tension that needs to be checked, no loud chain rattling and all that at the same time with much higher efficiency through more efficient conversion of electrical energy in kinetic energy. This results in a larger range than the previous model with chain drive.

The new features of the SXT1000 XL EEC – Facelift model are:

The SXT1000 XL EEC in the facelift version has been EC type approved according to the new guideline 168/2013 and is accordingly approved for road traffic throughout Europe. Another innovation is the newly designed license plate holder with license plate illumination and at the same time back and brake light function. On the handlebar, a new cable management was installed, through which all cables and lines are cleanly fixed.

The speedometer as well as the driving distance can be read via the speedometer, which is now supplied directly by the vehicle’s power supply and receives the data for displaying the speed directly from the engine via the control unit, which results in very accurate values. Another new feature installed is the cruise control which keeps the speed constant as soon as the driver drives the same speed for about 8 seconds. Same as with known from cars, the cruise control is deactivated by speed changes, ie acceleration or braking.

Proven things remain unchanged – such as the disc brake system front and rear and also the Click & Lock system of the seat post, which can be quickly and easily removed by foot lever from the vehicle and safely and firmly plugged within seconds. The acceleration takes place by means of a twist grip – also attached to the handlebars are the two rearview mirrors, as well as the ignition lock and the control of the horn and 12 V LED lighting system.

The 48V battery is still located under the footboard, which contributes so due to its low position to a very good and stable roadholding. The battery itself is on the one hand externally rechargeable and on the other exchangeable and can be replaced with lithium batteries, which we also offer. The advantages of lithium batteries lie in the much higher energy density, which manifests itself in the much greater range. Another major advantage of lithium batteries is the approximately half the weight, and the much longer life with appropriate care.

Now many think everything good and beautiful, but are deterred by the price of lithium batteries immediately – this is to say that these batteries are only supposedly more expensive. As soon as you look at it though, it is important to compare the number of charge cycles of both batteries. With the standard lead acid battery, the number of charge cycles is about 250 (ie the battery can be fully recharged up to about 250 times until it has to be replaced with a new one) – while the lithium battery is such that it can withstand up to 1500 charging cycles , If you look closely, the result of this comparison is as follows:

Comparing this total mileage with each other, this looks as follows: 54.000: 7.500 = 7.2 times higher yield with the LiFePo4 lithium battery at not twice the price – as a result, the lithium battery over the life expectancy is much cheaper than the lead-acid battery technology. When compared with the Li-Ion battery, the difference becomes even clearer.